Methyl Ethyl Ketone (MEK), also known as Butanone is a colourless liquid with a sweet and sharp odour of butterscotch and acetone. It is a volatile organic liquid with chemical formula C4H8O. It evaporates into the air and dissolves in water. It is a natural product originates from trees and is found in some fruits and vegetables. It is also found in water, air, soils and hazardous waste sites. Butanone is moderately flammable and even small flame can start a vigorous reaction. Acute inhalation and exposure to methyl ethyl ketone in humans results in eyes, nose, and throat irritation.

MEK is produced by dehydrogenation of secondary butanol in most industries. The gaseous alcohol is fed into reactor containing zinc or copper oxides as catalysts and the reaction takes place at high temperature, around 500Ãƒâ€¹Ã…Â¡C, and low pressure. Hydrogen is flashed off and the condensate is dehydrated by fractionation. MEK separates out from water-ketone azeotrope and is then distilled.

The main application for methyl ethyl ketone is solvent for lacquers as a low-boiling solvent for nitrocellulose, acrylic and vinyl surface coatings. It is advantageous as low viscosity solutions can be obtained when MEK is used as solvent while having high solids content without affecting the film properties. These lacquers are used in the automotive, electrical goods and furniture industries.

MEK is also a solvent used for the polymerisation processing of polystyrene, acrylonitrile-butadiene-styrene (ABS) and styrene-butadiene rubber (SBR). A derivative of MEK, methyl ethyl ketone peroxide, is used as a catalyst to initiate the polymerisation of polyester resins used in fibre glass reinforced plastics. 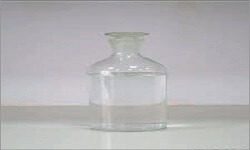